Growing up I loved beef stew - the big chunks of creamy potato, sweet carrots, and tender fall apart beef, all in a tasty gravy.  YUMMO! As an added bonus the house smells delish all day.

You can cook it in a slow cooker or in the oven. so if you prep the night before you can just throw it into the slow cooker and turn in on the morning, when you get back from work - voila - dinner is ready!

Usually I use mushroom soup in the recipe but today - Despite having 15 cans of cream of tomato soup I had zero cans of mushroom.

Never fear - I googled it and came up with a replacement. I will use this "MacGyvered" version today. (For those that don't know what MacGyvered is - basically anytime you don't have what you need you make it out of things on hand.)

2 lbs stewing beef
6 potato, peeled, cut in half lengthwise then each half cut in 4 equal pieces 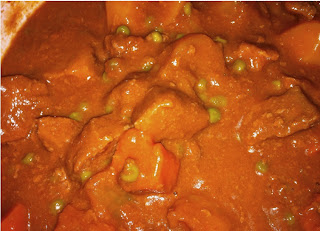 4 carrots, peeled and cut in chunks about the same size

1. Preheat oven to 300F
2. Place beef, potato, carrots in roasting pan. (or slow cooker)
3. Melt butter in small sauce pan and add the flour, simmer on med until the mixture turns golden. Add broth and bring to a boil until it thickens then reduce heat to med - low. Add milk and stir continually until it thickens again. (this is a basic Roux/Rue - Fancy I know!!)

4. Mix tomato soup and onion soup mix in a medium size mixing bowl. Add the Roux to the soup mixture and pour over the meat and veggie mixture.

6. For the last 20 mins add in the frozen peas and let warm through.

Serve with some buns - SO TASTY!

If you do have 2 cans of cream of mushroom soup go ahead and skip the fancy Roux step and just mix it with the onion soup mix and tomato soup.

Email ThisBlogThis!Share to TwitterShare to FacebookShare to Pinterest
Labels: To Eat